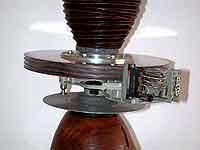 Statement about "Taciturn"
I've been developing tools and techniques since 1985 when I survived a nearly fatal automobile accident, that have enabled me to work on large scale works despite my handicaps.  These techniques have involved the use of robotics to aid and assist in material handling and work positioning during the creative process.  I have been interested in the computer revolution since it began and particularly the aspects of obsolescence since it occurs at such breakneck speed while new technologies supplant previous ones.

Taciturn is the most recent in my Totemic Series pieces, and is actually the first in the new "Post-Totemic" series.  It took 5 years to make - the longest of any of the Totemics and uses mixed media, elements of which have particularly interested me in the development of my robotic equipment.  Ironically, Taciturn uses cast-off hard drive discs from Governor Martinez administration when he was in term in the state of Florida (I purchased the equipment at a state surplus equipment auction).  The disks can no longer be used since the technology now no longer exists, yet the information undoubtedly is still stored on them, thus the title "Taciturn", literally meaning purposely not speaking.
The rest of the title Dho:\TACITURN refers to the computer terminology designation of the hard drive, i.e., Disk, hard, zero and the name, Taciturn.  In my view this is a work of what I would call "neo-futuristic folkart" since it employs hi technology aspects of the computer era, co-conjoined with references to Brancusi and woodturning at it's current highest level of technology (and for that matter, I believe, for several years to come).  The futurist elements harmonize/clash with the ancient elements of Modern, African, and Fauvist sculptural ideologies and current contemporary Hi-Craft concerns.
Not unlike ancient artifacts of many cultures, Taciturn conceals/protects literal code (and codification) from lost civilizations in a cacophony of slipping signifiers.
Mark Lindquist  12/03/2001
Silent Witness # 6~Dho:\TACITURN  (CLOSE-UP 1) 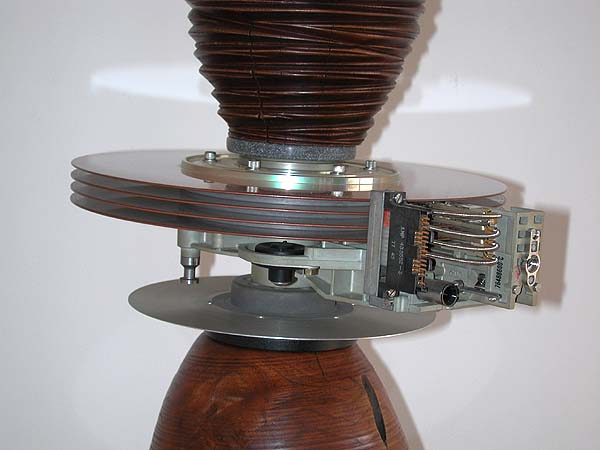